We are working on a proprietary technology, NayaRefine to deliver ultra-pure lead while reducing the Environmental footprint related to Lead Production.

Lead Production is very polluting & it is imperative we keep up with the rising demand & at the same time we follow the strict Environmentally Friendly Parameters. Lead is a key component in over a billion electrical storage devices used across the globe including every car and truck, hybrid and electric vehicle. Lead based batteries provide backup power for hospitals, electrify households and are the primary mode of energy storage for buildings & Data Centres. Over Ninety-six percent of all rechargeable batteries are lead-based but Lead is a finite resource & for this reason recycling is critical to keep pace with growing energy storage needs.

Key Goal: Finding a cleaner and more cost-efficient lead recovery and recycling methodology which is critical for the process of lead recycling going forward.

We are in the process of patenting our domestically developed Refining Technology, NayaRefine. We want to increase the production of lead to keep up with the rising demand without increasing emissions. We have locally developed a very modular design which can be conveniently deployed at stand-alone facilities namely existing battery recycling facilities enabling a circular economic model.

NayaRefine will utilise a water-based process combined with non-toxic, biodegradable organic elements to produce lead which will be 99% Pure. Our goal is to negate the use of Mining & reduce the cost of production & reducing the environment footprint in the process. One Module deployed can roughly produce 3-3.5 Tons of pure lead every day. 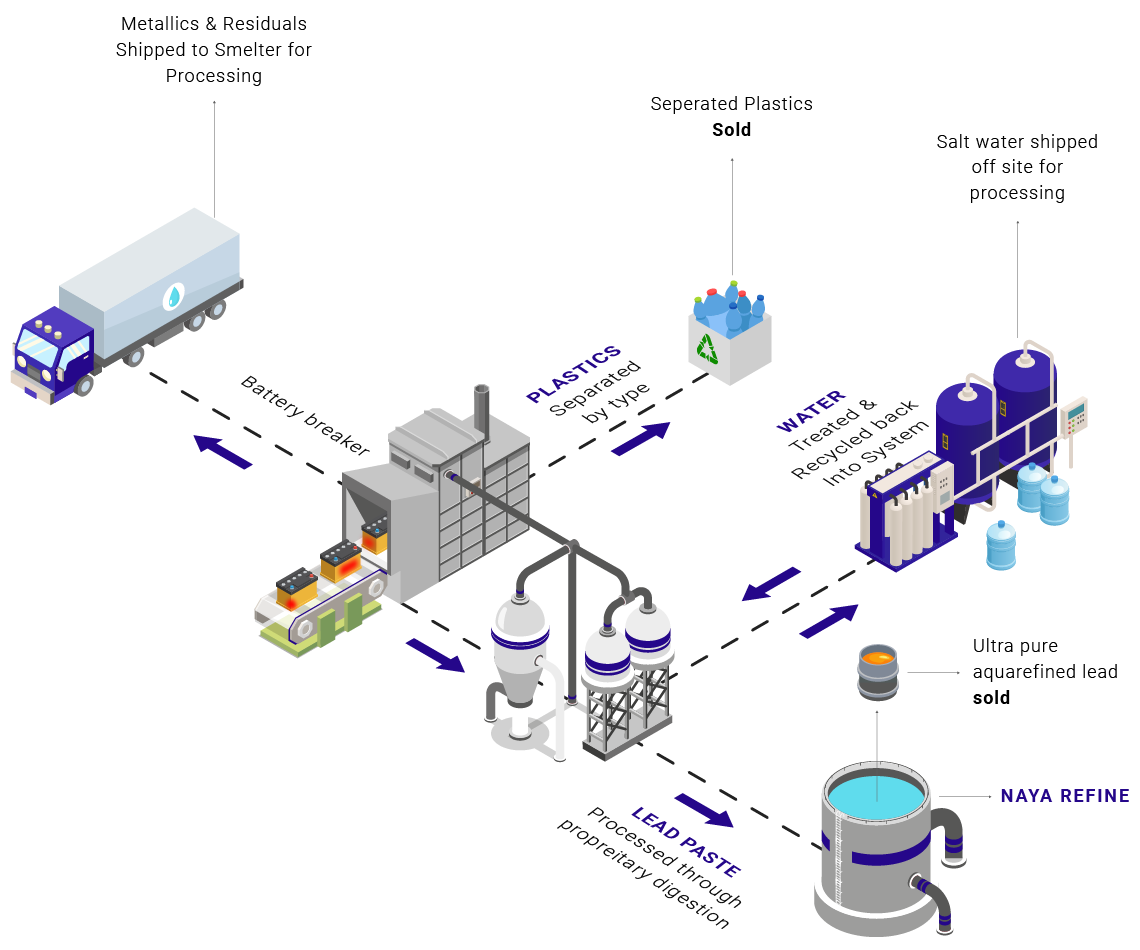 The conventional methodology applied to Lithium Recycling is that the Spent Batteries often end up at a Recycling Plant where the raw material is incinerated, and copper and nickel from the batteries are recycled. But in this combustion process, the lithium is lost. We do have efficient methods for recovery of Lithium & other precious metals from these batteries.

The lithium-ion battery market is expected to grow exponentially in the next five years in India & around the world, its recycling offers a $1000 million opportunity by 2030 in India alone as per the research reports However, recycling would gather momentum only when the Indian government brings in a well-defined regulatory and policy framework.

The lithium-ion battery market in India is expected to increase to about 132 GWh by 2030 (CAGR of 35.5%). The increasing volume of lithium-ion batteries would, in turn, lead to a growing capacity of 'spent' batteries in the ecosystem which if left untreated would lead to health and environmental hazards.

Our Goal is to recover lithium from the Spent batteries using hydrometallurgy. In the said process the raw material is first dissolved in water and that the substance you want to extract is then precipitated. This process is generally used to extract nickel and zinc & we want to use the same base process with our proprietary NayaRefine process to extract the Lithium upto 80% recycling rate with a low-CO2 hydrometallurgical recycling process. The batteries are first made safe for mechanical treatment, with plastics, aluminium and copper separated and directed to their own recycling processes. We want to also create a Second Life for these spent batteries where these can be reused in Energy Storage Applications.